Who Will Be More Hawkish, ECB Or Fed? 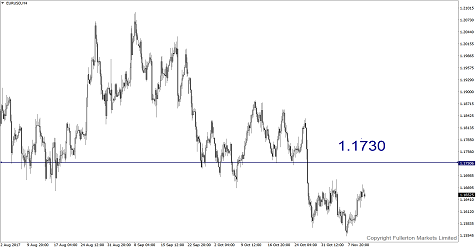 Top four global central bankers, including ECB Mario Draghi, Fed Janet Yellen, BOJ Haruhiko Kuroda and BOE Mark Carney will form a panel on Tuesday at an ECB-hosted conference in Frankfurt. The topic will be “challenges and opportunities of central bank communication.” What global investors will certainly focus on: who is the most hawkish and who is the most dovish.

Curve-flattening on both US and Euro Zone market, but more markedly in the United States, suggested investors have doubts over the future path of inflation and may be starting to price in a downturn just as the global economy picked up speed. Since the Fed began raising rates in 2015, the difference between 2/10-year US yields have shrunk to levels not seen since the 2008 financial crisis, now at 67 basis points. This also reflected uncertainty about the passage of a Republican-sponsored bill to cut US taxes, which has hauled down longer-term projections of inflation while expectations for upcoming rate increases pushed short-term yields higher. Curve-flattening typically signal a muted outlook for both growth and inflation. The trend suggested investors see a risk in the Fed’s current monetary tightening cycle to slow the world’s biggest economy. Also, flatter curve makes lending less profitable, posing a risk to the banking sector. With crisis-era policies still largely in place, how to remove the stimulus will be a big difficulty for the Fed. Markets expectation of Fed to continue to tighten gradually has been preserved by US President Trump’s decision to appoint Jerome Powell. With a number of Fed vacancies to be filled, FOMC could find it tough to massively shift Yellen’s current policy approach.

On the ECB side, what it focused most is the area’s potential future price growth. The hunt for returns drove the German yield curve to its flattest in two months. The ECB’s decision last month to extend its asset purchase programme and pledged to keep rates at record lows until QE ended have pushed bond yields across the bloc to multi-month lows. However, euro zone economy grew at its fastest pace in a decade this year. We think the flash estimate of third-quarter GDP in the euro area tomorrow will be 0.6% and October’s inflation reading on Thursday will further limit the ECB’s room to extend its ultra-loose monetary policy. We expect ECB to start to lean towards tightening bias as early as January next year.

This pair may rise towards 1.1730 amid possible sound economic data.

This pair may drop towards 112.80 amid delay in Trump’s tax reform.

We expect price to rise towards 1283 this week.