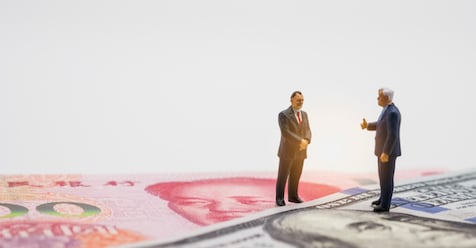 Despite a tentative deal to defer a set of tariff hikes in October, the December tariffs remain on the table. Gold, with its safe haven status, can still rise higher.

After 16 months of tit-for-tat threats in the US-China trade spat, we are finally seeing some light at the end of the tunnel with a three-phase deal. Phase one of the deal, which can be seen as an interim deal, was to prevent the tariffs that were supposed to happen on 15 October.

US President Trump and China President Xi were supposed to ink the deal during the APEC summit in mid-November but summit host Chile called off the event due to ongoing protests.

Fortunately, optimism was not dampened as the diplomats will likely clear up the minor setback and arrange another meeting to seal “phase one” of the trade deal, which negotiators are finalising after the 13th round of talks ended on 11 October in Washington.

Even if phase one’s deal is signed, it is not much of a breakthrough. The deal does not include the tariffs on Chinese imports such as laptops, toys and electronics that are set to kick in on 15 December.

Furthermore, Washington’s decision to break the agreement into parts and the lack of any significant US compromise indicate the challenges that Trump faces in reaching a comprehensive deal.

The current three-phase deal is sufficient only to save face on both sides. Chinese negotiators can take it back to Xi and he will sign it to appease his own people while Trump can wave the agreement around at election rallies and say that he was able to bend the Chinese to his own will.

Lastly, there are still many thorny issues such as intellectual property, opening up China’s financial system to US banks and the dispute in the South China Sea.

We believe that safe-haven currencies such as gold and yen will dominate during times of uncertainty and the slowdown in the global economy as seen from weaker data around the world.

This pair is hitting a dual resistance point and could head lower towards 118.50.

This pair may head towards 107.50 as dollar continues to weaken after a weaker ISM-manufacturing

After breaking up higher, we believe that gold can head higher towards 1533.