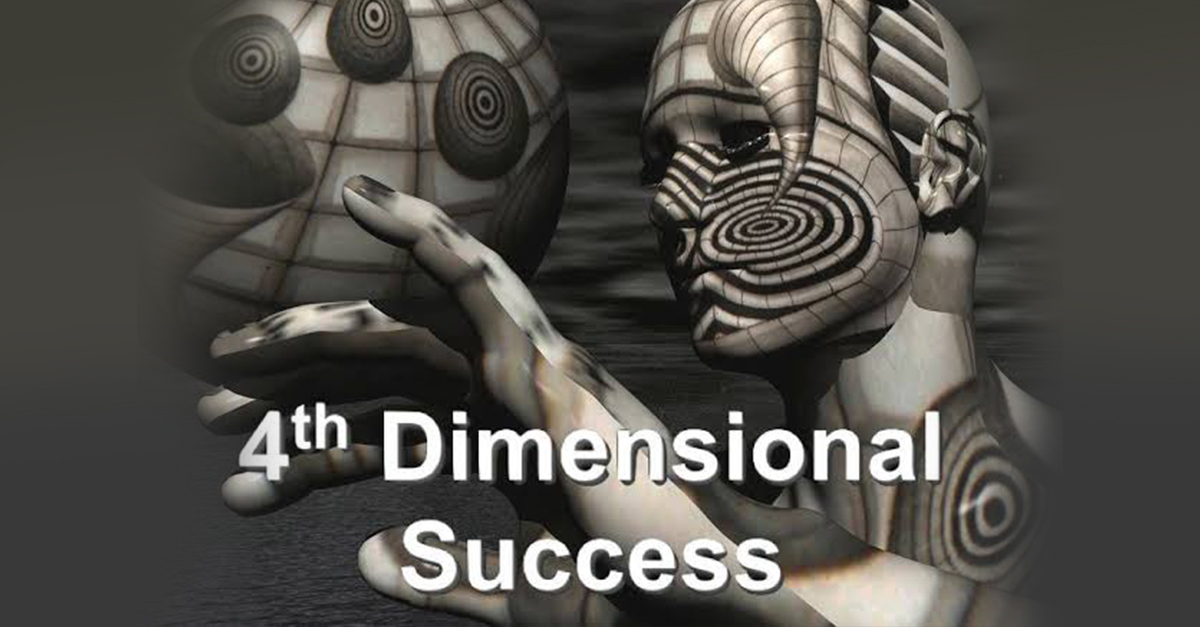 Find out the components of 4th-dimensional success, specially written by our very own CEO Mario Singh, and what it really takes to be successful in life.

How would you define something that is 1-dimensional?

Most would say its a line, but if you think about it, once a line takes "form" in the physical realm, it is immediately governed by the 2-dimensional plane. This is because when the line is drawn, it now has length and width.

This means that the term "1-dimensional" is purely imaginary. For it to actually exist, it must be governed by the rules of the 2-dimensional plane.

What about a 2-dimensional object?

Here's where it gets interesting. We humans, are 3-dimensional beings. However, since we have a physical form, we are automatically governed by the 4-dimensional realm. Hence, if you want to change results in the 3-dimensional world, you have to engage the rules in the 4th dimension to achieve the result.

What then, are the rules of the 4th dimension?

There are two: thoughts and words.

If you are doubtful that thoughts and words have the ability to change results in the 3-dimensional world, allow me to offer some examples.

It was previously thought that running a mile under 4 minutes was impossible. That was until a man called Roger Bannister came along.

After the devastation of his failure at the 1952 Olympics, Bannister spent two months deciding whether to give up running. He decided on a new goal: To be the first man to run a mile in under four minutes. Accordingly, he intensified his training and did hard intervals.

On 2 May, 1953, he made an attempt on the British record at Oxford. Paced by Chris Chataway, Bannister ran 4:03.6, shattering Wooderson's 1945 standard. "This race made me realise that the four-minute mile was not out of reach," said Bannister.

Roger changed his thoughts and beliefs about running the mile in sub-4 minutes. Everything he did from then on followed his thoughts.

The race was broadcast live by BBC Radio and commented on by Harold Abrahams, of Chariots of Fire fame.

"Ladies and gentlemen, here is the result of event 9, the one mile: 1st, No. 41, R.G. Bannister, Amateur Athletic Association and formerly of Exeter and Merton Colleges, Oxford, with a time which is a new meeting and track record, and which - subject to ratification - will be a new English Native, British National, All-Comers, European, British Empire and World Record. The time was 3..."

The roar of the crowd drowned out the rest of the announcement. Bannister's time was 3 min 59.4 sec.

All it took was one man to change his thoughts before he saw the results come alive. Roger Bannister, The First Man to Run a Mile in 4 Minutes

Dr. Emoto is best known for his work entitled "Messages from Water." He famously showed how words affected the formation of untreated, distilled, water crystals. Using words typed onto paper and taped on glass bottles overnight, the waters were then frozen and photographed. The evidence was startling. Dr Emoto, The Author of Messages from Water

The make-up of the human body is over 75% water. This simple yet profound experiment shows that we can positively heal and transform ourselves by the words we speak.

Here's 2 more quick examples on the power of words:

1) Read the book "Speeches That Changed The World" by Simon Sebag Montefiore. What are speeches made of? Words. Simon Sebag Montefiore (The Author of Speeches That Changed The World)

2) How did Barack Obama, initially reckoned as a complete outsider, become the 44th President of the United States? Did he have a track record of results to usher him into the Oval Office? Not exactly! It was his words that inspired hope and change. Barack Obama, The 44th President of The United States

If you want to radically change your current results in life, the solution is to change the thoughts you think and change the words you speak.

"Words are, of course, the most powerful drug used by mankind." -Rudyard Kipling

India’s Covid Cases, Inflation Concerns May Weigh on Risk Assets in Near Term

Social Trading: What You Need to Know and How to Benefit from It