Sneak Peek: UK Elections – Be Prepared for a Hung Parliament 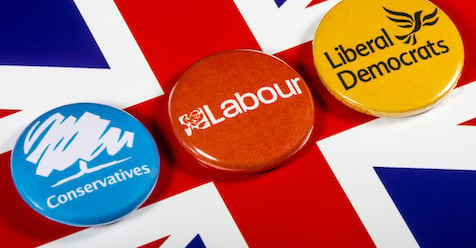 With the results of the UK election almost unpredictable, it would be prudent to stay on the sidelines for now.

UK’s controversial election whereby both parties were deemed flawed and untrustworthy is happening tomorrow. It will be the Conservative Party with Boris Johnson leading the party and the latter is Labour Party leader, Jeremy Corbyn.

At the start of the week, Boris Johnson was leading in votes with 359 seats while Jeremy Corbyn lags behind at 211. All signs were pointing towards an easy victory for Boris Johnson.

However, YouGov’s second and much-hyped constituency-by-constituency poll puts the Conservatives unchanged at 43% and Labour at 34%, up two points from its previous effort a fortnight before. The result is that Boris Johnson’s notional majority has been cut from 68 to 28 as his party’s seat count falls by 20 to 339 and Labour’s improves by the same amount to 231. The SNP takes 41 and the Liberal Democrats 15.

The fall in vote on Conservatives came after Boris Johnson was criticised for repeatedly refusing to look at the photograph he was shown by a journalist during an interview on Monday. Though the photo has been confirmed to be staged, the oppositions have used that to bring down the credibility of the Conservatives. This is a possible political power play.

While the Tories (Conservatives) remain the favourites, a hung parliament cannot be ruled out.

Tories have the highest chance of winning due to three reasons:

If we see a Tory majority tomorrow, sterling would rise sharply. This is because market believes that Boris Johnson will get his deal through parliament and the UK will leave the EU on 31 January 2020. Furthermore, Boris Johnson has also said that they will loosen their purse in terms of government spending of 13.8 billion pounds across departments by 2021.

However, if we see a hung Parliament, sterling would return to its Brexit low. And if Labour Party were to get a majority, sterling would fall as well due to intensifying uncertainties in the market.

All in all, it would be better to stay on the sidelines for the UK elections as anything can happen. Instead, we should see how the market moves after the elections and follow the trend thereafter.