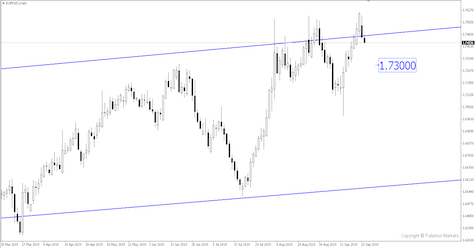 German PMI fell to a decade low at 41.4, confirming doubts that Germany is tipping into a recession. EUR/NZD could head lower towards the 1.7300 price level.

Manufacturing activity in Eurozone contracted at its fastest pace in nearly seven years with the index falling to 47 from 45.6. The German manufacturing PMI was at its lowest in nearly a decade at 41.4, causing Germany to be on a red alert for recession. Germany’s economy has been contracting for two quarters and the third-quarter GDP should be a contraction too.

However, euro recovered post-PMI announcement as the market is expecting Germany to introduce its fiscal stimulus to boost the country. German officials remain reluctant to increase the budget, and the longer they wait, the worst it becomes. Until Germany introduces its fiscal stimulus, euro will continue to be weighed on.

ECB President Draghi’s speech yesterday was downright dovish as he admitted that the eurozone economy is not showing any signs of rebound and a persistent downturn in manufacturing could infect the rest of the market. Draghi also said that the balance of risks to growth outlook remains tilted to the downside, implying that more easing could be expected.

EUR/NZD formed a double top bearish chart pattern and it seems like there is more room to move lower. We have RBNZ’s rate statement this week which could whiplash this pair but for now, it can move lower towards 1.7300.