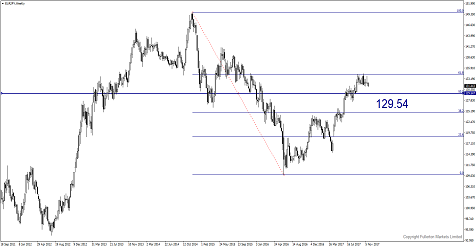 The euro has reached a two-month low against yen today as German Chancellor Angela Merkel failed to form a three-way coalition government. This raised concerns over political uncertainties in the Eurozone’s largest economy. Short term wise, there is still room for EUR/JPY to fall further.

On Monday, Merkel said she would meet German’s president to inform the failure to form a coalition government with the Greens and the pro-business Free Democrats (FDP). This decision to meet President Frank-Walter Steinmeier, who has the power to call new elections, signalled that Merkel would not seek a minority government with the Greens after FDP unexpectedly pulled out of the coalition talks. Germany faced the possibility of new elections after the FDP pulled out of talks on forming a government with chancellor Angela Merkel's conservative bloc and the Greens. They further said that the parties were unable to develop an acceptable framework for them to progress ahead.

Without the FDP, Merkel will be forced to continue her current governing coalition with the Social Democrats, although Social Democrat leader, Martin Schulz has ruled out the possibility of another coalition. To form a new government, the chancellor requires the support of two ideologically disparate parties, namely the pro-business Free Democrats and the left-wing Green party. Otherwise, Germany will have to call fresh elections.

A repeated election, in particular, would send shockwaves through the system, causing widespread concern if the right-wing Alternative for Germany could score an even better result than the 13% it won two months ago.

In the longer-term, we believe the main market driver are the actions of ECB. The euro had been recently supported by the strength of good Eurozone economic data and speculation that ECB could start sounding more hawkish on its monetary policy and outlook of the economy. In addition, the growth in economic bloc have exceeded that of US in the third quarter .The improvements in economic prospects in the Eurozone have also furthered boost the strength of euro.

The recent rise in oil prices had set the support for inflation in Eurozone, prompting the ECB to tighten policy as early as mid of next year.

Political uncertainties could drive this pair lower towards 129.54.

The flattening of US Treasuries curve suggests negative outlook on US economy which may drag stocks lower. Dow Jones index may hit 23169 this week.

Price may fall towards 1270 this week.