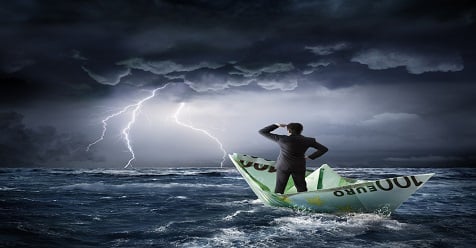 With both China and eurozone data much worse than expected, sell AUD/USD?

The dollar briefly touched a 2018 high on Friday, buoyed by a stronger-than-expected US retail sales print and disappointing Chinese and European economic data.

China’s economy slowed again in November as retail sales and industrial production weakened, creating a challenging backdrop for policy makers. They will be gathering next week to set the tone for the year at their annual Economic Work Conference in Beijing. Industrial production growth decelerated to 5.4%, below market participants’ estimates. Retail sales, formerly a pillar of support for the economy, posted the weakest performance since May 2003, rising 8.1% from earlier in the year. Chinese stocks fell along with its currency as data signalled a further slowdown.

It wasn’t all bad news though. Fixed-asset investment growth firmed, expanding 5.9% in the first 11 months of the year, while the surveyed jobless rate dropped marginally to 4.8%. This suggests that the stimulus used to cushion the slowdown is beginning to take root. The data points to a continuation of 2018’s targeted approach to support growth. PBOC Governor Yi Gang indicated on Thursday that monetary policy will remain supportive. We expect such support to involve another 200 basis points of reduction to the required reserve ratio for major banks, a measure that’s been used several times this year. With consumers cutting back, and output sputtering, the need for stabilisation measures is becoming more pressing.

In eurozone, nothing looks good as well. The manufacturing and services PMIs in the euro region unexpectedly dropped to its lowest in just over four years in December. While the drop was driven mainly by France where the “Yellow Vests” movement led to a contraction, there are also signs that the underlying momentum is dropping off.

However, political turmoil alone cannot account for the weakness that has characterised the eurozone economy since early this year, with trade tensions posing a headwind to investments across the globe. The continued deterioration in numbers in the eurozone is forcing policy makers to admit to a new reality after clinging for months to a narrative that the slowdown would prove temporary. European Central Bank President Mario Draghi said last Thursday that the world has seen increased general uncertainty and risks are gaining traction.

The changed outlook would be something for Federal Reserve officials to ponder when they hold their last monetary policy meeting of 2018 next week. The increase in policy uncertainties globally would set for a volatilities’ surge next year.

Subdued economic data may push this pair towards 1.1265 this week.

China data may continue to weigh on Aussie’s sentiment. This pair may drop towards 0.7130 this week.

We expect price to fall towards 1225 this week.