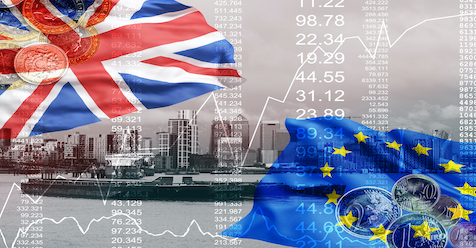 As UK needs to race for trade deal with EU in next 11 months, short GBP/USD upon any rally.

The pound fell last week and is on track for its worst week of the year as traders priced in renewed Brexit uncertainty over the next 12 months.

Sterling was trading 0.2% lower at $1.3050 in the wake of the Bank of England’s widely expected decision to leave interest rates on hold. Against the euro it fell 0.3% to trade at 1.1735. The central bank said it expected gross domestic product to rise “only marginally” in the fourth quarter of 2019, and that it was too early to tell how developments on Brexit will feed into the economic outlook.

The Bank of England is counting on a post-election boost to the UK economy, with policymakers leaving interest rates on hold on Thursday despite mounting evidence that growth ground to a halt in the final months of the year. The central bank said it expected gross domestic product to rise “only marginally” in the fourth quarter of 2019 but added that this was still consistent with its November forecasts, which predicted that growth will pick up in the spring, assuming “combined support from lower uncertainty, easier fiscal policy and somewhat stronger global growth”. Minutes of the Monetary Policy Committee’s latest meeting said that despite a breakthrough in US-China trade talks and developments on Brexit in the UK, it was “too early to judge how material that would prove to be for the economic outlook”.

The pound has fallen more than 2% against the dollar and euro last week, leaving it on track for its worst week against the single currency since July 2017, and close to its biggest weekly drop against the greenback this year. The currency’s sharp fall has dispelled expectations that a Conservative election victory could provide a period of market stability. Sterling shot to $1.35 on Thursday evening as an exit poll gave the first indication of the Conservative party’s decisive election victory, but has since given up all of those gains as UK Prime Minister Johnson pledged to outlaw any extension to the UK’s post-Brexit transition period at the end of next year. We doubt such a promise is realistic given the mammoth task of bilateral negotiation ahead and expect the deadline to be extended. Mr Johnson’s brinkmanship leaves markets facing another year with the threat of a disruptive EU exit hanging over the currency.

While wrapping up a basic trade deal within 12 months is possible, EU officials have warned that crucial issues, such as market access for services, may only be tangentially treated in any initial trade deal. Sterling could fall to $1.15 if the trade talks fail and the UK reverts to a WTO-style trading relationship with the bloc at the end of 2020. Prime minister Johnson has a powerful incentive to avoid the economic disruption that a no-deal Brexit could produce.

This pair may fall towards 1.2935 as traders start to weigh on post-election risk