Reasons Behind the Global Financial Crisis 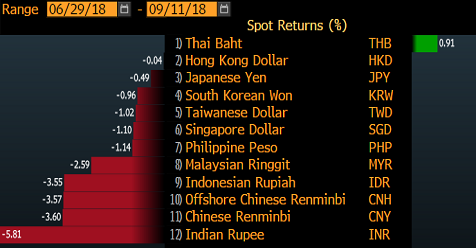 Downward pressures on emerging market currencies are raising questions on the need for further fiscal austerity. Find out how countries like Thailand are coping with currency depreciation.

Fed is walking ahead of anyone else in the world. The BOJ continued its aggressive easing with the introduction of forward guidance. The BOE raised rates, but Mark Carney made clear that it probably needs to wait a long time for another hike. The ECB is in no hurry to increase borrowing costs in the next 12 months.

Currency depreciation in emerging markets may continue at least throughout September. The markets expect the US Fed to raise interest rates once again this month and that will only add more pressure to the capital outflows from emerging markets.

At the moment, two countries that are probably facing huge pressure are Indonesia and India. Both central banks recently released measures to contain the currency depreciation. But the effects are quite limited as we see both the rupiah and rupee approaching a 20-year low.

China's export growth will likely slow over the next few quarters as gains in overseas orders moderate amid trade war uncertainties. Its exports rose 9.8% last month, compared with gains of 12.6% over the first seven months of 2018. The fall in new export orders within the country's official PMI, which dropped to 49.4 in August from 49.8 in July, will likely persist if the US imposes additional tariffs on Chinese imports.

We notice that Chinese assets, including the yuan, have been largely influenced by the rest of the emerging markets this year. Yuan’s correlation with JP Morgan’s EM currency index reached near 0.9 so far this year, and its correlation with the MSCI EM index hits 0.85.

Chinese officials are implementing various measures to curb yuan’s weakness, including resuming counter-cyclical factor in yuan’s fixing and imposing reserve requirement on some forward trading. One of the main reasons behind this is to prevent the currency from falling above 7 versus the dollar. Should USD/CNY penetrate the key 7.0 level, it could bring tremendous pressure on the rest of EM currencies and stocks. As such, contagion is real.

What are the effects of the financial crisis on the global economy?

First, we don’t think there is a broad-based financial crisis at this moment, and the intensity is way below the 2010-2012 eurozone debt crisis. The selling off of some of EM assets underlines several facts: 1) the effort to normalise the US monetary policy after a decade of extraordinary monetary stimulus has put many other economies at risk of higher inflation and external debts; and 2) a friendly tightening has pushed up the dollar, making it harder for countries such as Argentina to sell or service dollar-denominated debts.

Combine that with underlying vulnerability and political uncertainty, and the stage is set for a self-reinforcing economic meltdown, trapping the policy in a vicious circle. For example, central banks ease the monetary policy to inject liquidity to counter capital outflows, but the more they inject, the more currency depreciation pressures emerge to induce more capital outflows.

On the other hand, downward pressure on EM currencies pushed inflation higher and sowed doubt about the country’s financial position, raising questions about the need for further fiscal austerity and, in turn, threatening the growth outlook and collapsing confidence.

The solution of many countries is to increase interest rates. Is it the right solution or do you have better solutions to suggest?

Frankly, not much left. No country in the EM holds a large chunk of FX reserves like China does, so the room for them to defend the currencies is limited. If they don’t hike the rates to squeeze the shorting positions out, their financial systems would become more vulnerable.

Hiking the rates to curb inflation and currency depreciation pressure brings lots of side effects to the real economy. If central banks can’t afford to raise the policy rates, the other option is to strengthen cross-border capital management. This is not a healthy move as it reduces the function of an effective capital market system and distorts the valuation of the various assets in their own countries.

How will this crisis affect Thailand’s economy?

Out Performance of Thailand Baht

We notice that this crisis has brought the flows into Thai assets, and this is one of the major reasons behind the baht’s outperformance. Thailand’s 10-year government bond yield of 2.76% is lower than the US Treasury yield of 2.87%. Given that Thailand’s CPI has been accelerating since 2015, falling bond yield simply means that the flows are buying Thai bonds.

A robust 2Q GDP report may be enough to convince Bank of Thailand’s Governor of a need for policy tightening. With growth booming and strong exports, outperformance in Thailand assets looks reasonable.

Most of Thailand's exports are agricultural products. How will this be affected by the crisis?

While Thailand’s economic recovery is underway – supported by solid trade gains and tourism receipts – global risks are mounting. Trade tensions between the US and China threaten to disrupt regional supply chains but could also prompt some firms to shift production to places like Thailand, which may bring a sizable inflow into the country.

On the other hand, China has also imposed tariffs on some US agricultural products as a retaliation measure. Thai exporters may seize this opportunity to ship their products to China.

With regard to your forecast of the baht’s performance this year, what support and resistance do you foresee taking place?

The Thai baht's growing status as a haven in the emerging-market sell-off means the currency may just end this year with a relatively stable status. For now, support for USD/THB stands at 32.20 and resistance level at 33.50.