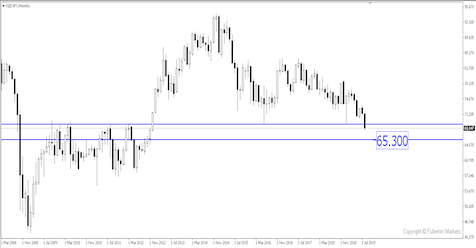 After the surprise cut of 50bps, RBNZ Gov Orr hinted at negative rates amid worsening trade conflict and darkening global outlook. NZD/JPY could head towards 65.30.

RBNZ surprised the market by cutting rates by 50bps, causing kiwi to tumble lower. The main reason for the aggressive easing was due to the slowing economic growth which is hindering inflation growth to RBNZ’s target.

Furthermore, RBNZ Governor Orr hinted at non-conventional policy such as negative interest rates or other non-standard measures such as purchasing bonds. The non-conventional measures will only come in if global outlook and trade conflict continue to worsen.

RBNZ also lowered its growth forecast and said that inflation may take longer to hit the midpoint of 1-3% target range.

With that in mind, trade conflicts and New Zealand data will be vital to RBNZ’s future monetary policy. NZD/JPY broke a key support this morning and could head towards 65.30 as neither of the points mentioned above seem to be improving.