Breaking News: GBP/USD at 18-month Low After Theresa May Calls Off MP’s Vote for Brexit Deal 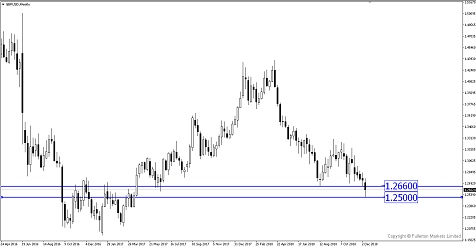 If UK Prime Minister May returns from Brussels with the same deal, we could see sterling dive lower. GBP/USD is at risk to fall further.

Prime Minister Theresa May has called off Tuesday's crucial vote on her Brexit deal so that she can go back to Brussels and ask for changes to it. She admitted that she faced a rout and that the deal “would be rejected by a significant margin” if the MPs voted on it.

She will be heading back to Brussels this Thursday to seek a better offer from the European Union. The most controversial part of the withdrawal agreement is the plan for the Irish border. This is despite European Council President Donald Tusk saying that the remaining 27 EU countries would not “renegotiate” the deal.

It is currently unclear when the Brexit Parliament vote is going to be rescheduled. If Parliament refuses to endorse the deal, the UK could leave the EU without a deal, unleashing political and economic mayhem.

According to Bloomberg, there are a few options the UK could take: 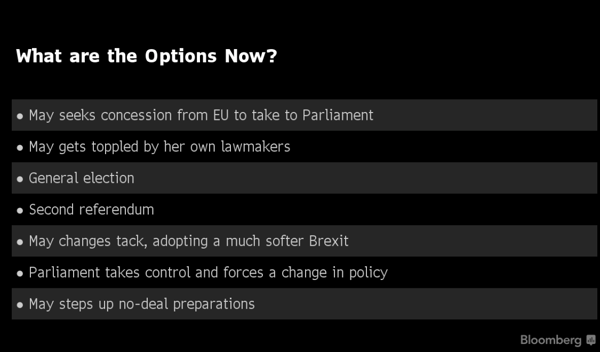 As Brussels has remained firm in its stance to not grant any further significant concessions, we believe that a no-deal outcome is very likely. Whether Prime Minister May will be there to see through the no-deal preparations is another issue as Labour leader Jeremy Corbyn had been hoping to table a vote of no confidence if Tuesday’s planned vote were to fail.

A challenge to Prime Minister May will be triggered if 48 Conservative lawmakers write letters demanding a confidence vote to Graham Brady, chairman of the party's "1922 Committee," which represents politicians who have no government jobs.

GBP/USD has fallen to an 18-month low at the 1.2500 price level. We are seeing some technical retracement back to the resistance at the 1.2620 level. The retracement could be short-lived as it is likely that there will be no change allowed from the EU, a point they have reiterated previously. This could cause GBP/USD to fall further back to the 1.2500 level.