Sneak Peek: ECB May Be Less Dovish Than What the Market Is Pricing In 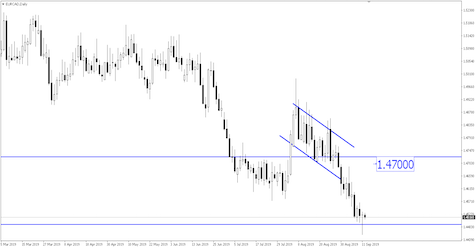 ECB is widely expected to cut rates by 10 bps tonight while introducing fresh stimulus package to prop up growth.

During its last meeting, ECB President Draghi explained the need for a combination of measures to combat its waning economy. Since then, nearly all of its economic data has slowed. Eurozone retail sales, inflation, employment and manufacturing activity slowed significantly. Furthermore, its largest economy, Germany, is tipping into a recession after having two consecutive quarters of negative GDP.

The market is pricing in an extremely dovish ECB given the sluggish growth and subdued inflation. Therefore, in order for euro to fall, ECB has to “over-deliver” on the stimulus package tonight in order to be in line with what the market has priced in.

The forward guidance of the ECB on interest rates and help for banks in offsetting the side effects of negative interest rates will be important as well.

ECB policymakers are also concerned on the effectiveness of prolonged negative interest rates and quantitative easing (QE). There is insufficient time or evidence to prove the effectiveness of cutting rates further in a long-term, low-rate environment. Persistent and very low rates, however, make consumers feel poorer, which can reduce spending. Negative rates also undermine bank profitability, which can discourage lending, though lending in the eurozone has been strong despite low rates.

Lastly, President Draghi could opt for a less aggressive stimulus package so as to leave more ammo for his successor Christine Lagarde when she takes over.

EUR/CAD is currently hovering at its low formed in Sep 2017. If the ECB were to hold back on its stimulus package, this pair could rise sharply towards the 1.4700 price level.