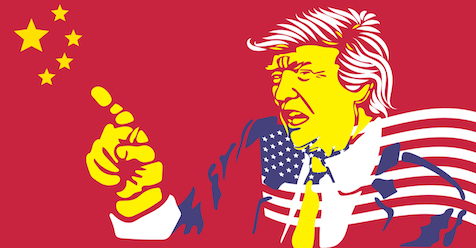 Trade tensions between the US and the rest of the world may escalate, short USD/JPY and long gold.

The Dow Jones Industrial Average suffered its biggest single-day pullback since early October on Tuesday after President Trump suggested the trade war with China could continue well into 2020.

The blue-chip index fell 1%, its third straight session of losses, as investors sought less risky assets. The yield on the 10-year US Treasury note dropped by the biggest margin since August.

Stocks pulled back after Trump said he had “no deadline” for reaching a trade accord with China during a meeting with the North Atlantic Treaty Organization secretary-general. He added that he liked “the idea of waiting until after the election” to reach a deal.

The pronouncements jolted investors, who had expected the US and China to reach a “phase-one” trade deal this month. Such a move would have likely staved off further tariff increases and signalled to investors that the two sides are working to de-escalate tensions after more than a year of contentious negotiations.

That now seems less likely, leading investors to pull back from risky assets, such as stocks, and load up again on investments considered safer during periods of economic turbulence, including gold and bonds. Trade tariffs have weighed on corporate profits of manufacturers, tech and other companies all year, and a protracted trade fight will further eat into profit margins, analysts said.

It is extremely difficult to base any investment thesis around trade, given how challenging the protagonists are. It has been a fairly bullish risk environment, and markets are squeezing higher toward the end of the year. Thus, they are a little more vulnerable to bad news.

Tuesday’s losses also appeared to factor in Trump’s threat to expand tariffs beyond imports from China. Over the past two days, the Trump administration has proposed new levies on goods from France, Brazil and Argentina.

During a conversation with reporters on Tuesday, Trump described the day’s stock market losses as “peanuts” and said he prefers to follow employment figures, which have remained strong most of the year.

Officials in both Washington and Beijing have said recently that they have been making big progress in coming to an agreement, including compromising on language in the negotiating text that had vexed negotiators for months.

The two sides have been planning a ceremony for the partial deal that would not include the two leaders. That eases the way to conclude an agreement – though it also means Trump would not get his long-sought signing ceremony with President Xi, which would be a political boon.

This pair may drop towards 1.10 amid US-France trade tensions.

This pair may fall towards 107.80 amid falling stock market.

We expect price to rise towards 1490 this week.