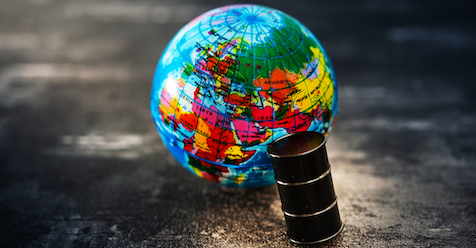 As risk-off sentiments may be here to stay for some time, buy gold at dip?

Oil prices jumped while global stocks fell after the US killed a top Iranian military commander in an air strike, shoving geopolitics to the top of investors’ agenda for the new year. Brent crude jumped 3.5% to more than $68 a barrel, putting the international oil benchmark on track for its biggest gain in a month.

US stocks dropped as the S&P 500 slid 0.7%. The pullback on Wall Street came a day after stocks began the new year with record highs. It also pulled the S&P 500 into negative territory for the week, snapping the benchmark’s five-week winning streak. In addition to Mideast tensions, investors parsed a survey showing that contraction in the American manufacturing sector worsened last month.

The materials sector was the worst performer in the S&P 500. Stocks were also down in Asia and Europe, with Germany’s Dax leading declines with a 1.3% fall. Over the past few years, these risks have undoubtedly affected markets, but hardly with any lasting impact. Yet, geopolitics remain important, if only because it could always turn into a nastier factor for markets at some point. Gold climbed to $1,588 an ounce, a 2013 high. Government bonds rallied, pushing the yield on 10-year US Treasuries down by 9.2 basis points to 1.7898%. Similar price gains were seen in the UK, Germany and other key European government bonds. The Japanese yen, also considered a barometer of investors’ levels of fear moved higher. The airstrike on Soleimani calls for a serious increase of the geopolitical risk premium.

This was supposed to be a holiday week for many traders. Many will be cutting the holidays short and calling in for an emergency risk meeting. Oil prices could pop above $70 a barrel for some time. Explaining its rationale for the air strike, the White House said the US had taken “decisive defensive action” to protect its personnel abroad by killing General Qassem Soleimani, the head of the Iranian Revolutionary Guards’ overseas forces. Washington blames Tehran for an attack this week on the US embassy in Iraq and said Soleimani was “actively developing plans to attack American diplomats and service members in Iraq.”

The wild card is whether turmoil in the Middle East would trigger a sustained sell-off in equities, depressing business and consumer confidence to the point where labour market and inflation concerns become secondary. We’d be surprised, but if Iran takes more drastic action than what we’re expecting, it will become a real risk. In the meantime, expect defensive stocks to outperform, with downward pressure on Treasury yields and gains for safe-haven currencies.

We expect price to rise towards 1590 this week.