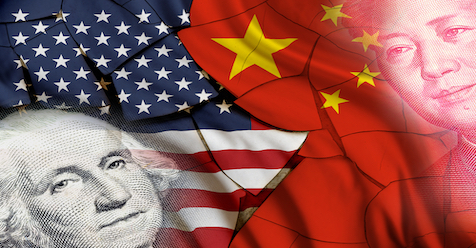 US stocks trimmed their gains late in the session after the Trump administration announced it had agreed to a limited deal on trade with China, as traders weigh on its significance and whether it will be sufficient in boosting the global economy.

Washington agreed to not raise tariffs on Chinese imports – which were due to start this week – in exchange for some concessions from the Asian nation, primarily on agricultural purchases.

As part of the deal, China would significantly step up purchases of US agricultural commodities, agree to certain intellectual-property measures and concessions related to the financial services and currency, according to Trump last Friday at the White House. In exchange, the US would delay a tariff increase due next week as the deal is finalised, though new levies scheduled for December have yet to be called off.

From experience, US-China trade agreements are not worth the paper they are written on, and this one has not even been put to paper. For now, though, indications on trade are a little more positive. If that persists, it could help put a floor under sliding global growth. Still, the October tariff that was avoided was not the main problem; it would instead be the December tariff increase, which will hit major consumer electronics products and brands. Taking both off the table would mean China and the US would have dodged a drag on GDP of 0.2% and 0.1% respectively.

On the cusp of US companies’ third-quarter earnings season, equity investors are focusing on one big question: When will falling earnings hit share prices? Markets are bracing for a third consecutive quarter of falling earnings, the longest streak in more than three years, with the energy and tech sectors expected to be worst hit.

On Tuesday, the International Monetary Fund (IMF) kicked off its annual meeting in Washington which is likely to cut its growth forecast for 2019 and 2020 in its World Economic Outlook. In July, IMF lowered its projection to 3.2% this year and 3.5% next year, its fourth downgrade since last October.

Chinese GDP data for the third quarter, slated for release on Friday, is expected to show that output growth in the three months to September eased to 6.1%, the slowest in almost three decades. That pace would be barely enough to allow the Communist Party to claim it is hitting its long-term growth targets.

Until such evidence is available, we must conclude that this pause is more ‘uncertain’ than durable US stocks which trimmed their gains late in the session as the Trump administration announced it had agreed to a limited deal on trade with China.

This pair may drop towards 0.6720 as market could stay cautious ahead of the release of China 3Q GDP.

This pair may drop towards 107.65 as dollar index may weaken further.

We expect price to fall towards 1465 this week.