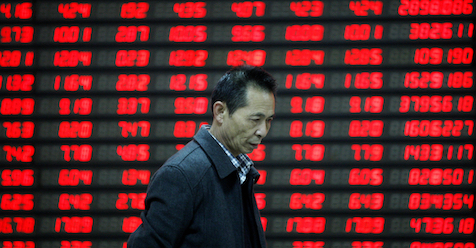 With risk-off mode expected to stay, buy safe-havens like gold and yen.

Chinese stocks tumbled as traders returned from an extended lunar new year holiday despite a promise from the central bank to pump liquidity into the financial system to help cushion the blow of a deadly coronavirus outbreak. The CSI 300 index of major Shanghai- and Shenzhen-listed equities dropped as much as 9.1% at the open on Monday with losses across the board.

That puts the benchmark on track for its worst-day performance since August 2015. China had reported 17,205 confirmed cases of the coronavirus and 361 deaths as of the end of Sunday. The fall in equity markets came even though the central bank announced on Sunday that it would provide 1.2 trillion yuan in additional liquidity to money markets in the largest one-day open market operation since 2004. That was on top of 30 measures across five ministries and regulators meant to provide financial support to industries seriously affected by the outbreak. Price movements for most individual stocks listed in mainland China are capped at 10% in either direction.

While there is no doubt that growth has slowed in recent years, the base from which China is growing has exponentially increased. While gross domestic product growth was at 9.4% a decade ago, the base for last year’s 6.1% growth was 188% larger than 10 years ago. This means that what Chinese consumers and workers do today matters a lot more than it once did. Chinese consumers drove global economic growth in 2019.

People in the hospitality, tourism, travel and retail industries are seriously worried about the impact of the coronavirus. Chinese travellers are especially valuable because they tend to stay longer and spend more than those from other countries. For example, in the US, Chinese tourists stayed an average of 18 days and spent $7,000 per visit last year, according to a 13D Global Strategy and Research report. While Chinese spending in the US was already slowing because of the trade war, Asia and Europe will now feel the loss as well. That will have knock-on effects in areas that are dependent on tourism: retail, restaurants, luxury goods and services of all kinds.

Optimists will note that during the SARS outbreak in 2003, Chinese growth dipped only briefly before rebounding to a robust 10%. But back then, China accounted for just 4% of global growth, compared to 16% today. Consumer spending wasn’t nearly as developed, and Chinese tourism was still mainly inbound.

The Hubei region is a huge area for supply chains. Travel bans have made it difficult for people to work and to keep factories running. It is possible that with enough supply chain disruption, China won’t be able to meet its US trade deal purchasing commitments. That would of course have a geopolitical impact, particularly in sectors including technology, which are still among those most closely linked to Chinese businesses.

If the tech sector starts to look wobbly, that might affect energy and material inputs, and in turn, be the catalyst for the larger market correction that many of us have been expecting for some time. All this makes the outbreak of the virus exactly the sort of unexpected trigger event that many market participants have been fretting about. This adds on to issues like declining US corporate profit margins, record debt, liquidity issues and negative yields.

We expect price to rise towards 1600 this week.