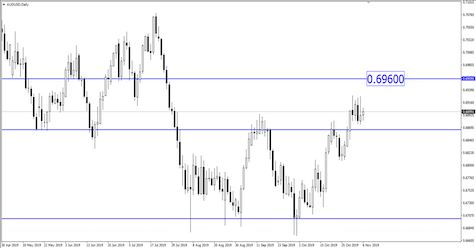 With no further rate cuts by RBA this year and an improvement in risk sentiment, Aussie dollar could rise higher until the end of 2019.

The Reserve Bank of Australia (RBA) adopted a wait-and-see approach and kept rates unchanged yesterday at its historical low of 0.75%. The decision came off the back of a 25-basis-point cut at last month’s meeting, after another two cuts in June and July.

However, we can expect further cuts in early 2020 after retail sales data pointed towards a slowdown. Furthermore, household debts remain high and we are seeing a substantial decline in the rates of unemployment. Lastly, inflation remains well below the RBA’s target range of 2-3% and jobs numbers.

In his statement on the decision, RBA Governor Philip Lowe said that even though the global economic outlook “remains reasonable,” there are several notable risks on the horizon.

He also said, “The low level of interest rates, recent tax cuts, ongoing spending on infrastructure, the upswing in housing prices in some markets and a brighter outlook for the resources sector should all support growth.”

The current improvement of the risk sentiment from progress of the US-China trade war’s “phase one” could be the main booster for risk-on currencies such as the Australian dollar. Trump is expected to sign “phase one” of the trade deal this month.

AUD/USD could rise higher towards 0.6960 on basis of an improvement in risk sentiment and pending rate cuts at least until early 2020.