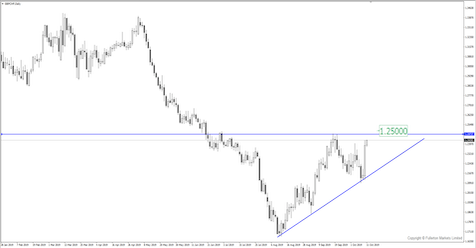 Until the EU accepts the deal, we believe that it may be too early to buy into pound.

Both PM Johnson and Ireland’s Varadkar said they “see pathway” to the Brexit deal which sparked optimism from the markets. However, even if the UK and Ireland have found common cause, the other parties such as the EU, DUP and the MPs may not like what they hear.

The only reason why the market overreacted was due to the lack of updates for Brexit with the deadline of 31 October looming closer every day. The overreaction may have caused a situation whereby pound may have been overbought as well.

For now, it may be better to stay on the sidelines as it is hard to tell how far the markets’ optimism could extend. If the EU were to openly reject or even cast doubt on the new plan from the UK, a huge sell-down could happen.

GBP/CHF is showing a strong buy momentum, but we can expect some rejection of the resistance level at 1.2500.