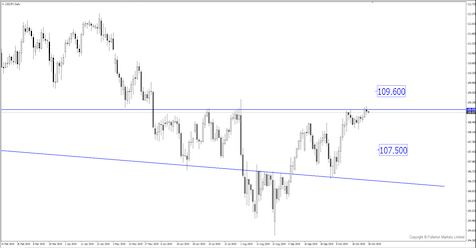 With the number of FOMC members who believe further easing is not necessary increasing, the cut tonight might be the last one for the year. USD/JPY could rise higher.

Federal reserve will be announcing its monetary policy announcement tomorrow morning at 3am (GMT+8). Dollar is strengthening ahead of the policy despite a 94% chance of a rate cut according to the Fed funds futures.

This goes against economics 101 as the prospect of easing is usually viewed as negative whereby dollar should be falling. The reason why dollar strengthened ahead of the expected rate cut tonight is due to the market believing that this will be the last rate cut for the year.

The market will be pricing in two rate cuts after the previous FOMC due to tepid growth and weaker US data. This has since changed after three additional FOMC members came out to state their stance that they do not believe Fed has to ease further.

Since the previous meeting, the economy has somewhat improved in certain areas such as unemployment rate hitting a 50-year low, housing market activity improving and stock markets hitting a new high. Furthermore, the de-escalation of US-China trade tensions has also boosted markets’ confidence.

On the other hand, retail sales, wage growth and the US service sector are showing signs of slowing which makes the rate policy tonight a volatile yet exciting one.

We believe that Fed is likely to keep the rate cut tomorrow as their last. USD/JPY could rise towards 109.60. However, if Powell announces the need for additional easing, we could see USD/JPY fall towards 107.50.