2 Reasons Why Euro Will Continue to Fall 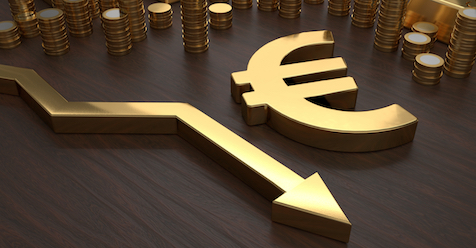 A meaningful recovery in euro dollar looks unlikely in the coming months after Friday’s PMIs. EUR/USD could head lower.

Christine Lagarde has called on European governments to boost public investment and increase harmonisation in services, banking and capital markets to rebalance the region’s economy away from exports to domestic demand.

Giving her first big policy speech since replacing Mario Draghi as European Central Bank president on 1 November, Ms Lagarde said Europe had a “moment of opportunity” to tackle the challenges presented by trade tensions and technological disruption. “We have a unique possibility to respond to a changing and challenging world by investing in our future, strengthening our common institutions and empowering the world’s second-largest economy,” she told a banking conference in Frankfurt on Friday.

The new ECB president drew a distinction between general government spending and “productive expenditure k – which, in addition to infrastructure, includes R&D and education.” She said productive investment had fallen as a share of overall public spending in most eurozone countries, while “new investment needs are emerging.”

Jens Weidmann, the head of Germany’s central bank, spoke a few hours after the new ECB president and delivered a clear warning that he would oppose any effort to signal that interest rates would be lower for longer by changing its inflation guidance. Laying down a marker ahead of the strategic review, the Bundesbank president said he would look unfavourably on any shift to a more symmetrical target that accepted a period of inflation in excess of its objective. “A one-off promise of ‘lower for longer’ holds the allure of a monetary stimulus now, at the cost of higher inflation in the future,” he said. “But when the time comes to make good on the promise, the benefits have already been reaped, and only the cost of higher inflation remains. At this point, policymakers have an incentive to renege on their promise as well.”

The US Federal Reserve has already launched a strategic review, part of which involves considering introducing a “make-up” rule that would mean if it undershoots its inflation target, it would promise to overshoot it by a similar amount in the future. But Mr Weidmann said this would present “a communication challenge and a credibility risk” for the ECB because it would breach its main objective to achieve inflation below, but close to, 2%.

Due to euro dollar’s heavy weighting in dollar index (57.6% weights), moves in the single currency have always had huge impact on global financial condition. Dollar’s rally in the period of 2014-2016 was not merely caused by the rate hikes, but euro’s plunge driven by the deteriorating economic activities in the bloc directly buoyed the greenback; Chinese yuan’s 6.7% rally in 2017 was also mainly driven by the stronger euro, as expectation on the ECB to hike rates at that time was overwhelming.

A meaningful recovery in euro dollar looks unlikely in coming months after Friday’s PMIs, before EU leaders agree to implement more fresh fiscal measures. Dollar is expected to stay firm in the near future, regardless of the Fed’s stance on its monetary policy. Equity investors may not favor such a condition as a strong dollar tends to tighten global financial condition, with stocks in emerging markets possibly becoming more vulnerable due to capital outflows.

This pair may rise towards 109.50 amid rising stock market.

We expect price to fall towards 1438 this week.